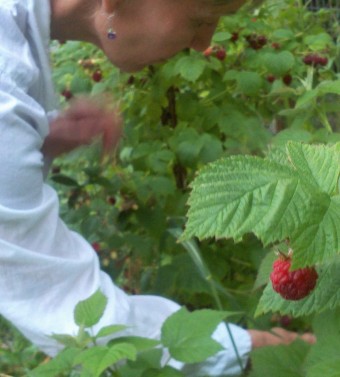 September has begun picking at the clothing summer gave her, refusing to eat, and sighing a lot. There’s little doubt it’s about over. October is waiting in the wings, audacious, pregnant with color, unafraid of snow.

“What’s your favorite month?” I ask God. I say this just to get a little conversation going. I don’t actually care about God’s favorite month, and usually, I hate these kinds of questions.

But I ask because God seems distant today. God is in a very big mood. Bigger than sky or any of the planets in our solar system. Bigger than whatever is beyond what we can see. Big. You might think such a big God wouldn’t have time to contemplate her favorite month, but you’d be wrong. As God and I have gotten better acquainted, certain subtleties of her personality have surfaced. She can be stubborn and compulsively attentive to minutia. She likes chit chat. For someone who created the known and unknown universe, she can seem quite shallow and petulant, although she’s also the ultimate role model for apologies and forgiveness. There’s a steadiness I appreciate, even if some of her ways annoy or confuse me.

“I like them all,” she answered. Her voice was knowing. Patient. “But there’s something intriguing about December in Montana, don’t you think?”

I regretted asking. I could feel some kind of lesson coming on. “Depends on what you mean by intriguing,” I said. “I don’t like snow, or the holidays, or bare branches, or slick roads. If you mean the fight to survive is intriguing, then yeah, I guess.”

God didn’t answer directly. Instead, she blurred herself into the gray ash of a cremated body. The bruised purple of sunrise filtered through the translucent storm that was God. I watched wide-eyed and afraid as she rolled the months into a blanket with an impatient flourish. She grabbed my soul, wrapped me tight in the distorted jumble of seasons, and suddenly, we were on the shores of Hawaii. There, clad in bright strips of rags, she scrubbed out the differences on sharp volcanic rocks, welcoming waves of salt water with the wrinkled solemnity of the ancient ones. Gradually, all beautiful, all dangerous, all vital distinctions gave way and floated out to sea.

“There you go,” she said. “An occasional hurricane, but otherwise, totally placid. Bland. Uniform. Predictable. Safe. Are you happy now?”

And then I was alone. September doesn’t need me anymore but I know the perils of October all too well. Before the ground freezes, I will transplant rhubarb and stack the split and fragrant wood high against the coming winter. I’ll warm myself in the crackling circle of fire, and with the few words I have left, I’ll resurrect the seasons, even those that will eventually do me in.

2 thoughts on “A Farewell to September”