“It won’t always be like this,” God said, perched high in the cottonwoods near the river. And sure enough, even as I watched, God lifted into the sky and disappeared. The wind spread a translucent blanket of snow across the field, and bitter cold blew into my bones while I fantasized flying after him. I sent what I could spare aloft and turned toward home, diminished.

“It’s better to grow smaller,” God said, meeting me at the door with dark beer and bread fresh from the oven. I drank and ate and crawled into God’s warm chest, which is always cracked wide open.

“Why do you expose your heart like this?” I asked in a critical voice, even while I let the pulsing blood restore me. I could smell my own hypocrisy, taste my own selfishness. But I stayed anyway.

“You’re tenacious,” God said. “I’ll give you that. But you’re not as tough as you think.”

“Yes I am,” I said. I heard the sound of cloth torn, stitches ripped, fire snapping and hungry. I heard waves crashing, thunder roaring, the shriek of fallen prey, the whimper of starvation. Stones rolled, ice cracked, rifles fired, and the earth groaned with the weight of voracious appetites and malignant neglect.

“Paint me a picture,” God said. “With lots of lavender and green.”

“All I have is this awful gray,” I said, apologetically. “And maybe a little brown.”

A broken sun climbed into limited sky. The foolish snow refused to do anything but reflect light–as if it could stay cold and drifted forever. “You have to melt sometime,” I said to the snow with an evil sneer.

“And so do you,” God said, rubbing my stiffened neck. Reluctantly, I nodded and went to the basement where I keep my secret supplies of recycled canvas and secondhand paint.

“Perfect,” God said, as I emerged, laden with a rainbow of options. I shrugged, trying to hide the awful relief, the fearsome comfort, of being known.

“You’ve locked up an astounding number of people,” God said, settling into the sage green recliner. “Expensive choice,” she added. She pushed back to elevate her feet. The news coverage of poorly fed immigrants imprisoned in New Jersey seemed to have stimulated this comment. I nodded politely, but this is not my favorite topic.

“And a few of them are on hunger strike,” God said, shaking her head.

“Do you disapprove?” I asked, confused about where this was going.

“Oh no,” God said. “I’m right there with humans risking their lives for justice.”

“But starving yourself is a form of slow suicide,” I said. Some people think you don’t approve of that. Ever. At all.”

“Ironic” God said. “You have the death penalty and you force tubes down the noses of those willing to die for a cause.” I flashed back to a documentary of prison guards inserting those tubes. It had made me cry. God interrupted my unsettled ruminations. “You remember that Mary Oliver line ‘Tell me, what is it you plan to do with your one wild and precious life?’”

“Of course,” I said. “But she was not writing about hunger strikes.” I looked straight at God. God rolled her eyes, stood, and began pacing.

“I forget how rule-bound and simplistic you humans can be. It’s rare for you to transcend—to realize that you’re only temporarily clad in that one wild and precious life. There are times to let go.”

I looked out the window, wishing for silence, but God didn’t let up. “Thousands of years ago, when the Poet wrote ‘…a time to kill and a time to heal…’ she didn’t mean these actions were preordained. There are times to be born and times to die. Times to reap and times to sow, times to throw stones and times to gather stones together. Each of you has to figure out when.”

I thought of Palestinian youth, throwing stones. Dying. I thought of scorched swaths of earth–reaping and sowing obliterated by climate change, chemicals. The enormity of moral agency chilled my inner being. I wanted a default setting to fall back on.

God read my mind. “No part of you is ever alone,” she said, standing near the fire, rubbing her hands. She reached in her pocket and handed me a shiny business card. It read:

I felt sick. “No,” I said and threw the card in the fire. “Too subjective. Too permissive. Too precarious. I’d rather have our legislatures just make some laws.”

God laughed. “No you wouldn’t,” she said. She pulled the card back out of the fire. The flames had done no damage. “Your best decisions are based on love. Your worst are made in anger, driven by fear, greed, revenge, or hatred. It is your body–your one wild and precious life. The laws you need are written in the marrow of your bones. Sorry, but that’s just the way I made you.”

“Bones disintegrate,” I said, still hoping for an easy way out.

“I know,” God said. “But the dust you become is light and beautiful, and the Wind is gentler than you can imagine right now.” 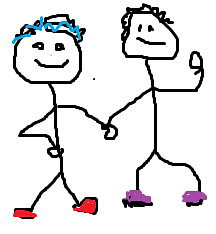 “I love scientists,” God said, sipping herbal tea, relaxed and open. “I just love them. They try so hard to understand, reveal, predict, and invent. Aren’t they something? Such visionaries.”

“Yeah,” I said. We sat for a while. Then I added. “You know, I’m somewhat of a scientist myself.

“Hmmm,” God said. “I don’t often think of you that way, but now that you mention it, I can see a little scientific mindedness in you. More artist, but sure, a little scientist.”

My eyebrows bent down, but I pushed them back up to the level of civil discourse. “I love scientists, too,” I said. “But doesn’t it bother you that you’re kept out of the equations so often?”

“What?” God said. “Are you nuts? I don’t have to be recognized to be present. In fact, I get a lot of exercise jogging around in equations and hypotheses. They’re great places to work out. Science-types are like moles, digging into creation. They examine air, stars, creatures deep in the sea. I love that burning desire to understand.” God paused, looking like a proud parent, and added, “I never dreamed they’d come up with the idea of splitting an atom! Wow. Just wow.”

I was aghast. “God!” I yelled, “You know what we’ve done with split atoms, right?”

God gave me that “duh” look and said, “Children take things apart, and sometimes, they can’t get them back together. It’s part of the long, long walk.” God’s voice faltered. I could tell I’d hit a sore spot, but I was unrepentant.

“It’s more than that,” I said, my voice deadly serious. “And you know it.”

God sighed. “Okay. True. Divide and conquer is a primitive strategy. Bringing things together is a more advanced skill than taking them apart.”

If I could’ve held it together, I would’ve given God a “duh” look back. But I lost it and slid into my usual slash and burn. I stomped back and forth on our concrete floor until I gave myself shin splints. I growled until my throat hurt. I punched the air. I kick-boxed with God. My heart rate moved past the aerobic range. I shouted, “We are tragically fractured, and we just keep fracturing further. Human trafficking, walls and greed, gutted landscapes, forced pregnancies, prolonged suffering at the end of life. War. Torture. Starvation. Nuclear waste. And you sit there, admiring scientists and spouting off about bringing things together?”

“Yes,” God said in a stubborn voice. She appeared to be unfazed. “Exactly.”

She sat down and took a sip of tea, trying to hide her tears. I hid mine, too. A long moment passed. Then, a cruel storm blew up, and fierce as a mother eagle, God flung her powerful, protective wings around the cosmos. My reach is maddeningly limited, but I tried to do the same. 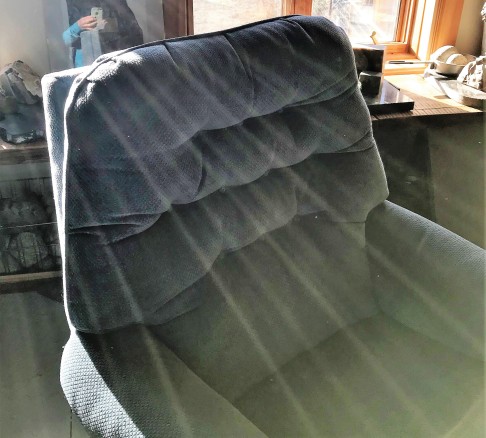 Today, I sit in the light of the rising sun, rocking myself in the old blue chair–the one I loaned my mom before she died. It’s an unusually small recliner. For a few months, with planning and effort, she could get out of it by herself. But then she couldn’t. She fell and laid helpless on the institutionally-bland carpet for who knows how long? They found her tangled in the floor lamp, alive but not coherent, her body bruised from her efforts to get up. That was Mom. Never stop trying to get back up.

Dylan Thomas would have approved. Mom did not “go gentle” into any dark nights. In her stubborn way, she raged against the dying of the light. When faced with a challenge, she’d clamp her thin lips tight, stomp on the gas and shoot down the road, her ever-shrinking body taut with determination. She’d arrive in her shiny white Ford, peering at the road from just above the steering wheel. She never stayed long.

God has stopped by to reminisce. He’s wearing decades on his shoulders, and our whole upstairs has become quite crowded. “Oh God,” I say, shifting to make room, glad for the company. “Remember how she believed that when she got to heaven, she’d have to give Dad an account of how she managed the ranch after he died?” God nods, a little teary. He really admired my mom over the years. “And remember how much she gave away?” I added. God smiles with pride.

There’s not much else to say. Those last three days, death pulled her tenderly down through the layers of life until it was just her brain stem fighting for air. The Wasabi sting of emotion threatens my placid mood as I sit with the memory of her  insistent breath, sucked in and out, in and out, irregular and awful. Not a memory anyone needs to have.

After she fell out of this chair, she never sat in it again. I brought it home—slightly more worn. I’ll keep it a while.

“Tell her yourself,” God answers, and holds up a mirror Mom carried in her purse. She used it to reapply her lipstick and smooth her hair. God slips open the purple plastic cover, and I see the unadorned eyes and lips of eternity–of now and forever. I see the eyes of God, wide like a baby, and the lips of God, as full as Bob Marley’s, singing.

I fight to let God’s swaying body save me–to believe in mercy and compassion in this broken, greedy, hungry world. To use my breath for good, and welcome my demise with grace. I rock in the old blue chair, sun warming my bones, while God, as audacious and angular as ever, dips and weaves as he hammers out the beat on the steelpan drums.