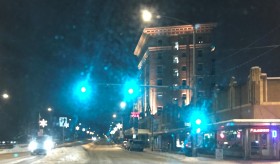 “I need a break,” God said as we walked gingerly down the icy sidewalk in the gathering dusk.

“Me too,” I said. “Those beaches in Aruba look pretty enticing about now. Why’d you let my ancestors settle in Montana anyway?”

“Ha ha,” God said sarcastically. “They were as stubborn as you. And there weren’t a lot of options, since they’d barely escaped the potato famine in Ireland, right?”

I made a noncommittal snort and we kept walking.

“No, really,” God said. “I’m thinking about leaving for a while. You know. Engage in a little self-care. Sharpen the old perspectives.”

“You can’t,” I said with my usual unearned authority. “You’re God.”

Panic surged through the atoms that comprise this thing I call myself. I began to deconstruct. I told myself it didn’t matter. Wholeness is an illusion. I have a vague memory of being stardust, and yes, golden. But the path back to the garden is littered with grotesque distortions, slick with blood and oil.  Far too treacherous to consider. Not humanly possible to traverse. The gates have been shut for a long, long time.

Even so, I suspected that was where God was going. This is exactly the kind of break God would take. A morning stroll in the Garden of the Beginning. Alone. Contemplative. Enduring the solitude of the imagined and the dead.

God seemed unafraid, but I was terrified. Swimming through illusions of myself in an existential whirlpool. Nose barely above the surface, clinging to a singular vision of companionship. Grinding my teeth against the uncharted terrain of not-self, not-ego, not-my-way.

Amazingly, even in such disarray, I remembered my manners. I knew I should wish God safe travels. That’s what friends do. Suck it up and extend a sincere fare-thee-well.

We walked a bit further. I searched for words. “Well, bon voyage, God,” I said, pushing aside the primal scream lodged in my throat, ignoring the bereavement washing over me. “If anyone deserves a nice vacation, it’s you.”

“Well done,” God said, and smiled. For a minute, I hoped maybe it was all a joke. A test. But God continued.

“I’ll send messages in the evening, or deep in your dreams. You’ll be fine. And I won’t be gone that long. Carry on.”

The words lingered in the solitary air. “Carry on,” God had said. “Carry on.”

God was puttering around outside my window in the translucent glow of sunrise, looking pleased and peaceful. The sun and similar stars and cosmic wonderments are working out more or less as planned, which is a great comfort to the creator. Other ideas seem to be working out less well.

I put on my boots and stomp out to visit, but God waves me away. I understand. Sometimes, we get a little too much of each other.

To tell the truth, most of the time, I don’t actually adore God. By human standards, God’s a freak. Too big, too little, gargantuan, minuscule, too packaged and narrowly defined, but then expansive beyond the expanses—so utterly Alpha-Omega that it blows any honest mind to smithereens. A glimpse of God is far worse for the average brain than serial concussions on the football field.

But God, embodied in our evolution as a species, is my only hope. At times, this feels feeble indeed. But the great forgiver hangs in there with me, within me, around me, through me, and I hang in with her, even though for the life of me, I don’t get why it has to be this crazy. The planet lumbers along, at risk of becoming another rock orbiting the lovely sun, our species cavorts perilously close to extinction for no good reason, and she suffers along with us instead of zapping the motherfuckers responsible for this mess.

Since I’m dressed for the cold anyway, I fall backwards in the snow and flap my arms and legs in an effort to leave a mark on this transitory day. A gesture of defiance. A plea.

Sky above falls open, snow rolls up like carpet, and the filmy veil between time and eternity melts. A strong wind blows the seasons by, and in an act of pure mercy, God kneels to gather my whitened bones.

“Thank you,” I whisper. She nods. Something vastly beyond adoration breaks my heart, and I see all the people that ever were glowing golden in the backlit dawn, not one of us worthy of a goddamn thing. Not one.

“Take a picture,” she says. “This will be hard to remember.” I slug her in the arm as hard as I dare and get to my feet, shaky but ready. It’s time to go back in, fry some eggs, and mumble my usual incoherent prayers. 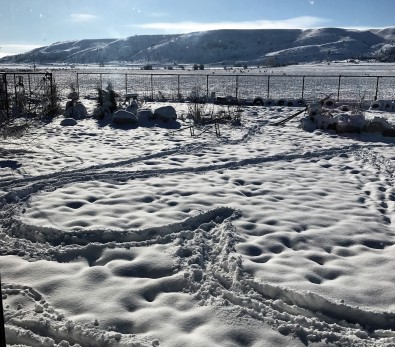 God asked me out on a date, and I threw caution to the wind and accepted. Dating God has distinct disadvantages. First, we go nowhere. We sit in second-hand chairs, drinking stale beer, listening to tunes people posted on Facebook, and we cry. We cry for the homeless, the cold, the hungry, the uninsured, the unwelcome. We cry for those grieving, those healing, and those who will not heal. We cry as the embers stop glowing and the room grows cold. The saints and prophets, the angels and devils, the Buddhas and philosophers crowd together for warmth, and the sky stays bleakly gray. We cry.

“God,” I say, trying to stifle the sobs. “This…this…this isn’t helping.” But one look at God and I collapse back into the mire of all that is wrong, all that hurts, all that enrages. God is midnight blue, absorbing the light and the agony, mixing it up. God is alive with sorrow, awash in the dreadful choices humans keep making. We are destroying the earth. We torture, maim, consume, lie, steal, and kill, denying culpability past the point of absurdity. God gulps it down, takes the hits, stays the course.

Finally, God drains the last of yesterday’s special Yuletide brew and pulls himself together. He’s not a sloppy drunk, and I’m not a cheap date. We hold hands as the crashing waves of all that is true slowly calm into a serene sea of snow. It’s brutally cold. The shy sun pushes through cracks in the blanketed horizon, insisting we remember how beautiful–how devastatingly beautiful–the frozen earth can be when hit by light.

“May I have this dance?” God asks. I agree. This may not be the tune I was hoping for, but there’s no way to know when the band will stop playing. It seems wiser to make the best of it now, rather than wait for the perfect beat. 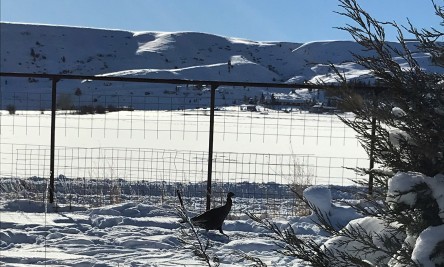 I positioned my cold feet in the warm sunlight, determined to sit until the embers in the stove or the chickadees outside the window convinced me that anything matters. So far, it hasn’t worked. I’m in a wicked post-holiday mood. I just threw out three beautifully-rising loaves of bread after discovering that flax can indeed go rancid, and this is not good for you. I’d taken a little taste of the dough. It was unusually bitter, which led to the research, which led to the painful placement of the loaves in the compost bucket. I hate that things go rancid.

I want everything to stay whole and healthy, even in large quantities. I often cloak my hoarding tendencies under colorful claims of creativity and eventuality. But I know the truth about me. I’m a mixture of pioneer ancestors and an excessive culture. Like God, I see potential redemption in even the worst of the worst, and try to make use of everything. I hate letting go.

The chickadees are gone. Wild turkeys are pacing the perimeter of the garden, calculating whether flying over the tall fence will result in enough nourishment to justify the energy expenditure. They don’t know about the rancid flax-laden dough about to appear. This may sway their decision. I trust their digestive systems can make use of rancid flax, or they’ll know enough to turn up their pointy beaks and strut away.

“And you?” God says gently, speaking from deep within the pile of nearly-rotten wood I’m trying to burn up.

I pause to think of myself as a calculating turkey, pacing the outer edge of Eden. “No idea,” I answer. That kind of wisdom is a distant memory in the oldest part of my aging brain. But what I do know is that a great, rancid toxicity is blanketing the earth from massive accumulations of wealth. And I don’t know how to shake it off. Even as I scorn the greed of those who have too much, I wonder how I can get a little more. I hate this about myself.

I try my usual cure. “Give until it hurts, you selfish hypocrite,” I say in a nearby mirror.

God rushes toward me like a grandmother saving a child from a coiled rattlesnake.

“No!” she shouts, waving her arms. “No. Stop it. That kind of talk doesn’t help anyone.”

I jump back, startled. She throws a blanket over the mirror.

“Take a beer and sit among your possessions,” she says sternly. “Be in your body. Be in my body. Open your soul. And notice where it hurts, darling. Then, gently, give. But give until it heals. That’s all. Give until it heals.”

This is a complete impossibility. But that’s one of the things I like about God. She often pairs the impossible with dark beer.