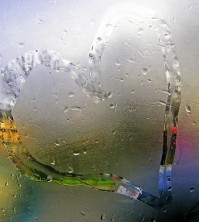 “Up to you,” God said. This is a lonely answer.

My hot bath had steamed the bathroom mirrors. I was brushing my teeth, contemplating all the irritating, confusing choices humans face. Which main dish to order, which shirt to buy, which route to take, which career to pursue, which allegiances to pledge, which weapons to use, which sacrifices to make, which people to love–how much to eat, when to arrive, when to leave, when to support, when to withhold, when to sing and when to scream–the choice of what to believe, who to trust. Even not choosing is choosing. There’s no way out.

“I take that to mean I’m supposed to know already,” I said. Like a tired professor, God wrote the words justice, mercy, and humility in the steam on the mirror. “Oh, sure,” I said. “Thanks, Mr. Subtle. I think you left out truth and compassion. Maybe I need a bigger mirror.”

I thought I was being funny. God didn’t laugh.

“You know,” I continued. “Lots of choices are made with no regard for you, one way or the other. You’re a pawn—a lousy excuse or nothing. You’ve tragically over-estimated our capacities. And now? What are you doing? We’re in so much trouble.”

God crossed his arms. Uncrossed his arms. Looked at me. His gaze was steady. I could see through his planetary eyes to the end of creation and back, the path swirling and surging with deceptively simple equations. He was everything. He was nothing. He was of a purity I could not comprehend. He opened his hands, and a thousand knives clattered to the floor. He was bleeding profusely.

“God!” I gasped. It looked like he might lose consciousness. I tried to cushion his fall. I shook him and said, “God. Hang on. Hang on, buddy. Do you hear me? Stay with me, God. Stay with me.”

I shouted for help. There was no one to call 911. There are no ambulances equipped to deal with a hemorrhaging universe and a broken-hearted God. The child at the border, dead. The old woman starving in Syria. The tender earth split open and gutted. God’s creatures eating plastic, God’s body bleeding out. God’s face in my hands.

“This is too hard,” I sobbed, filled with fear and self-pity. “You know it’s too hard.” I started to lay down beside him on the cold tile floor, to give up, to wait for the end in the waning warmth of a dying God. But he was gone.

I opened my inner eyes, still afraid, but the tiniest bit hopeful. Far, far away, I could see him walking with great deliberation in the garden. Small birds were closing his wounds, and color was returning to his cheeks. I knew I was invited. And I knew it was up to me.