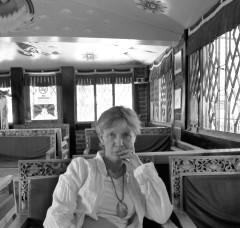 There was massive, unavoidable death on the horizon this morning. It’s there every morning, but I usually look away and eat toast with the radio on—the familiar lulling me into another manageable day. But God had gotten up quite a bit earlier, pulled the shades on all the other windows, and hid my coffee. I ran for the beer. God blocked the way. I feigned a coughing fit. God slapped me on the back and waited. I plugged my ears and said “Na, na, na, na, na…” but God sang along. So I unstopped my ears, opened my eyes, settled my soul, and looked the only direction I could see.

“Is this really how it ends?” I said to God. “So much suffering. So much violence. So much hate?”

“I don’t know,” God answered. “It might end more peacefully. I’m as curious as you.”

I thought about it. Am I curious about which disaster ends life as we’ve known it on planet earth? Maybe a little. Because I’m old anyway. Will it be global warming or cooling, caused by us-who-shall-not-be-named? Forced population increase because no birth control or abortions, or even educational opportunities are available to the women? Will it be war, humans determined to kill each other for the sake of….ummm….ideologies? Money? Their idea of God? Will it be the rich, with their weapons amassed, or the poor, with their fists hardened in hunger and despair?

I snapped my attention back to my demanding guest. “God. I’ve mentioned this before, but how can you let people judge, abandon, hurt and kill each other, claiming it’s your will?”

God’s head sagged. “Yeah, I wonder that myself. But I decided on this free will frontal lobe experiment with you all. I’ve given you as many hints and examples as I dare, modeled options that would provide sustainable ways to live, and graceful ways to die. I’ve put nature in motion–wondrous, awesome, stunning works of art that should inspire. Do you have any idea what’s gone wrong?”

“Well, God,” I said. “Not really. I mean, I try, but I’m one of them. Remember? Just as susceptible to deception, greed and hatred as the next human.”

We sat down and drank the coffee together in silence. God likes it black and strong. I prefer a fair amount of half-and-half.

7 thoughts on “Saturday Morning, Me and God”